Please note: As of April 2012, Yahoo! have sadly removed support for Yahoo! Widgets

If you have already installed Yahoo! Widgets, then you can download the following BOINC widgets for your Windows or MAC desktop. 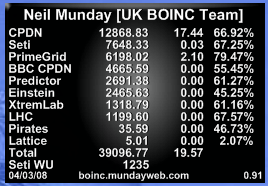 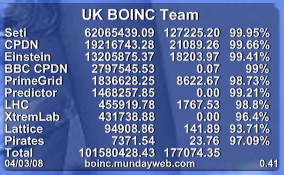 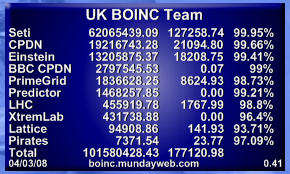 The widget offers the following features:

This program is free software; you can redistribute it and/or modify it under the terms of the GNU General Public License as published by the Free Software Foundation; either version 2 of the License, or (at your option) any later version.

This program is distributed in the hope that it will be useful, but WITHOUT ANY WARRANTY; without even the implied warranty of MERCHANTABILITY or FITNESS FOR A PARTICULAR PURPOSE. See the GNU General Public License for more details.

Note: Make sure you have to download and installed Yahoo! Widgets before proceeding.

1: If an instance of the widget is already running, close it first. (Right click -> Close widget).

2: Left click one of the download links above and choose "Save" when prompted, and save to your "My Widgets" folder.

3: To start the widget, simply double click the file in your My Widgets folder or open it via Yahoo! Widgets.

4: If upgrading, you will be warned that the widget has been modified since you last used it. Click "ok".

The widget needs to know what your user ID is. Simply right click the widget and select "Widget Preferences" and enter your user ID. If you do not have a user ID, simply register for free.

Currently the widget will contact boinc.mundayweb.com for your stats every 8 hours.

Please do not modify the widget to increase the frequency of the updates as this will put an increased strain on my server and is not necessary as your stats are only updated once a day.