Honza has this table of RAM requirements for BOINC per project. (Not all projects featured yet) 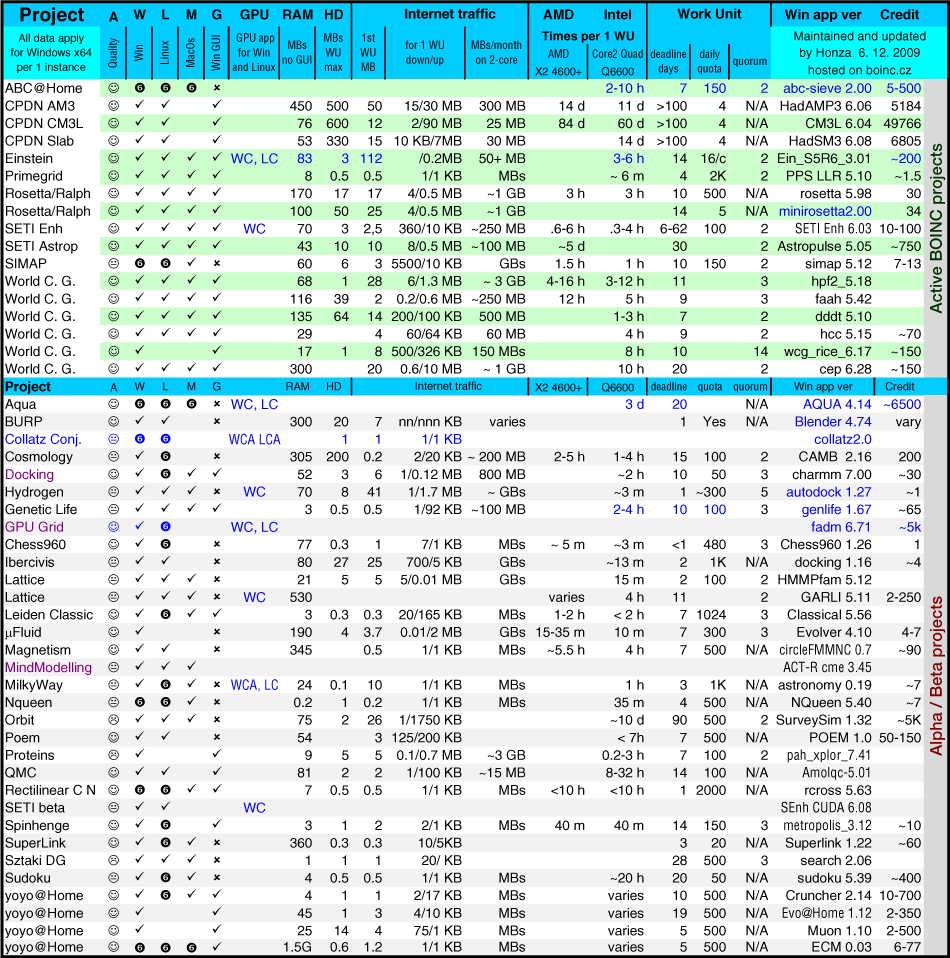 Legend: RAM means maximum RAM usage without GUI. L is for Linux. M is for MacOS. "6" means that Linux sends 64-bit application; where mark is missing it *should* mean there is no application for L or M available. All other numbers apply to Windows application.

COLUMNS EXPLANATION: Project name - may include subprojects (CPDN Slab models, Sulphur cycle model or Coupled model) or some versions of project (SETI official/unoptimalized, optimalized, Enhanced application). no GUI - RAM usage with no GUI (graphic open Windows not opened). It doesn't says if application has GUI or doesn't; albeit most projects do.

Internet traffic Some users have slow (dial-up) or limited bandwidth internet connection; internet traffic generated by BOINC projects may be an issue. 3 columns try to delineate demands of each project. Note that when running several projects, you need to average each upon your resource share. 1st WU - download demands on first WU which includes: application + project files (CPDN model inputs, life-science protein database etc) and finally one WU. Usually, there is no need to re-download whole again unless (i) new application is released, (ii) new input files for WUs are deployed, (iii) project reset. 1 WU down/up - first number enumerate size of the WU for download (data for analysis); number after slash is the usual size of WU for upload (tasks size). MB/month - when running project on 24/7 basis, 100% dedicated on dual-cored CPU (be it reference machine of AMD or Intel, whatever generates more tasks - see below), traffic may considerably grows and make it almost impossible to participate for some users. In other words - users provide idle CPU cycles and HD space (see next) but also internet bandwidth.

HD space Each project needs it's application, downloaded WU, some temporary files and intermediate tasks and it occupies HD space. . Total HD space depends on how many WU are you running (see max size) and how many WU are ready to crunch (see WU down).

Times to completed 1 WU This is not a bechmark; it gives an average numbers on reference machines. Also, numbers do change on other HW specification such as RAM speed, FSB, cache size etc. TO make numbers more accurate would only mean to make table several times larger. AMD - reference machine is AMD64 3000+ or X2 3800+ running 2 WUs. Intel - Pentium 4 at 3.6 GHz with HyperThreading on and running 2 WUs tu utilitize extra ~20% of performance. Intel - Pentium D 820; a dual-cored CPU running 2 WUs.

Work Units (WU) Deadline - time limit to report tasks since their download. Smaller numbers tends to give credit faster, longer period may be suitable for dial-up/non-permanent internet connections. There are much more consequences with scheduler state, possible WU cache etc, but those topics are covered elsewhere. Quota - each project has a maximum daily WU quota per CPU (limit on how many WU can be downloaded). This mechanism prevents trashing large portion of WUs on project server from unstable computers (or project application). Note, that this number decrease when host becomes less reliable (invalid WUs) and gets to it's maximum after issue is solved. Quorum - most projects use a redundancy to ensure that tasks are reliable; quorum is the number of tasks need in order to validate WU. Until this number is reached, credit is pending; it is granted after validation on server side.

Application/WU version Most project are in constant development and new version of application may occur. This may change other parameters of project, such as memory usage, application size, times to complete etc.

Credit - do I need to say something there? Science matters.